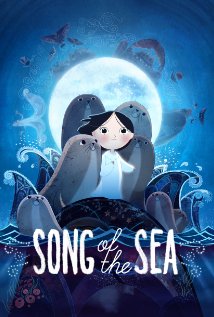 The story of the last Seal Child’s journey home. After their mother’s disappearance, Ben and Saoirse are sent to live with Granny in the city. When they resolve to return to their home by the sea, their journey becomes a race against time as they are drawn into a world Ben knows only from his mother’s folktales. But this is no bedtime story; these fairy folk have been in our world far too long. It soon becomes clear to Ben that Saoirse is the key to their survival.

The Song of the Sea is a beautifully animated movie that draws inspiration from Irish folklore. It is an imaginative fairy tale, filled with magic and mythology. You are captivated from the opening scene, and don’t want to stop watching until you are certain that Saoirse and the fairies are saved.

My knowledge of Irish mythology is sadly lacking, so I really enjoyed the immersive universe of the movie. I was reintroduced to Selkies and met the Deenashee, and the goddess Macha. I also appreciated the inclusion of Irish songs, and the way in which the music took on a key role in the plot.

The characters are truly great as well, the right mix of flawed and lovable. The family dynamic is the heart of the movie; Ben and Saoirse’s mother’s death at the start of the movie is the catalyst for the events that follow, and the film closely examines the relationships between the family members. My favourite character was the Great Seanachai, though I of course loved Ben, Saoirse and  Cú.

Visually, Song of the Sea is stunning; gorgeously drawn and vividly coloured. Certain scenes will stay in my memory long after I’ve forgotten the plot of the film.

The Song of the Sea is beautiful and intriguing from start to finish. Fans of Studio Ghibli will not want to miss this one.

One thought on “Movie Review: Song of the Sea”

I love hearing from you and will always reply! Cancel reply

Check out what I’m currently reading!